At Cardinal Heenan we offer our students a broad, balanced and challenging curriculum that builds on past experiences, and prior knowledge from previous years, as well as being introduced to new exciting areas of mathematics.

The KS3 curriculum is based on the White Rose mastery approach which is a set of principles and beliefs that all pupils are capable of understanding and doing mathematics. Topics are taught in blocks and build upon prior learning. We sequence concepts and methods so that previously learnt ideas can be connected and interleaved into new learning. There is an emphasis on understanding and making connections, putting depth before breadth, and thus incorporating plenty of problem solving and reasoning activities.

The KS4 curriculum is designed to build on skills learned in KS3. We aim for students to become logical thinkers and continue to develop their problem solving skills. The scheme of work encourages all students to recognise the links between maths and other subjects, to make the most of every given ability, enjoy and achieve personal growth and academic excellence.

We believe mathematical intelligence is expandable, and that every child can learn mathematics, given the appropriate learning experiences within and beyond the classroom. Our curriculum map reflects our high expectations for every child. Every student is entitled to master the key mathematical content for their age, by receiving the support and challenge they specifically need.

In the summer of 2019, the Head of Maths and key stage leads visited a number of our feeder primary schools, to gain an insight into the mathematics curriculum in Key stage 1 and 2. Returning from this, it allowed them to evaluate and develop the current schemes of work in place to adapt and improve the sequencing of topics and the starting point of topics in Year 7.

As a member of the West Derby Learning Network, we facilitate meetings with primary and secondary subject leaders to collate information on the KS2 curriculum. We proactively share progression models to support the transition from primary to secondary, not just in mathematics but across all subjects in the school.

What we offer our pupils?

At Cardinal Heenan the chance for mathematical opportunity does not stop in the lesson for your son. We have a vast amount of celebration days, workshops, guest speakers, visits and fundraising opportunities calendar-wide. Please also see details in our Numeracy section.

On Wednesday 12th February 2020, students from Year 10 took part in a Mechanics Workshop that looked at using mathematics to solve real life problems.

Martin Bamber from AMSP delivered two mechanics sessions. The students were encouraged to apply the maths they had learned in school to these real life situations. The students worked in groups and were amazed to discover Austrian Felix Baumgartner, who has become the first skydiver to go faster than the speed of sound, reaching a maximum velocity of 833.9mph. Jack (10E1) said about the session: 'It was a great lesson and Martin was boss but the man who fell out of space should have died 800mph is too fast’. Lewis (10E1) thought ‘the lesson was enjoyable and fun. I loved talking about the space jump’.

Students then moved onto investigating which would be the fastest mode of transport to travel from one point in London to another. They looked at travelling by car, speed boat, bicycle or public transport and used string to measure the paths that they would need to take. Joe (10E2) found the session ‘helpful learning how maths is used throughout life and modern society’, and Mikey (10E2) thought ‘it was very helpful for me in my other subjects such a geography and business’.

Ben (10E1) said of both sessions ‘It was an enjoyable way to understand and learn about how maths can be implemented and gave us real world examples with easy to understand information’.

Martin spoke to the students about studying A Level Mathematics and Further Mathematics and what career pathways need a high level of mathematics. The students thanked Martin for coming in school. We are looking forward to him coming back in March to deliver a session on networks to Year 9 students. 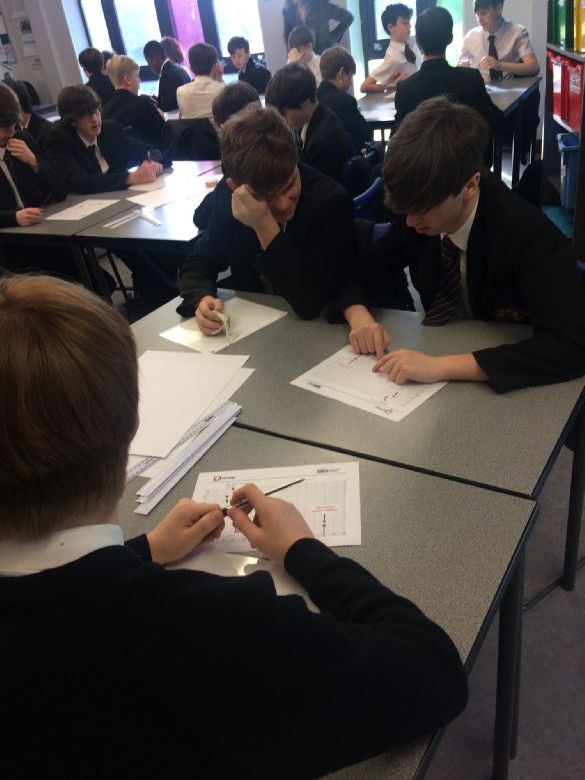 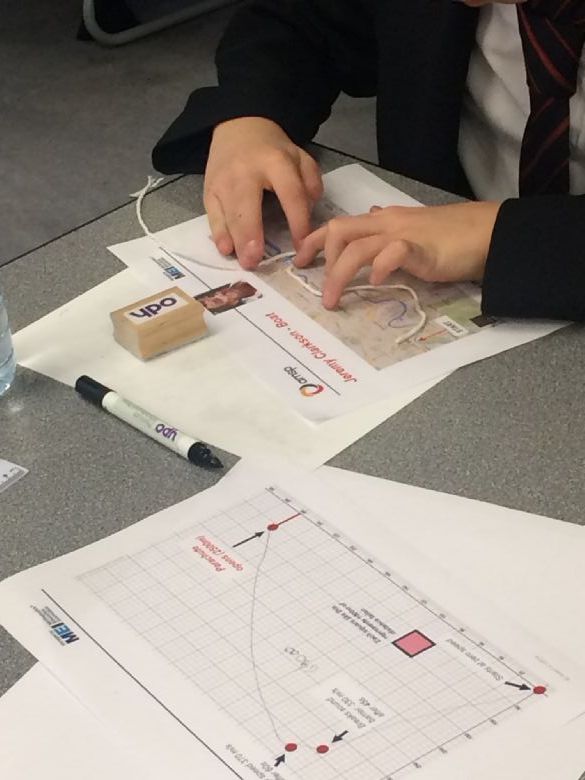 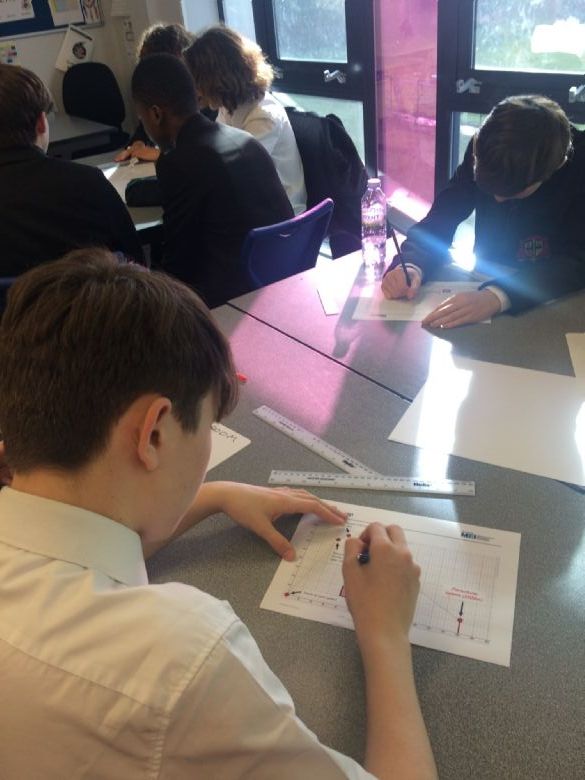 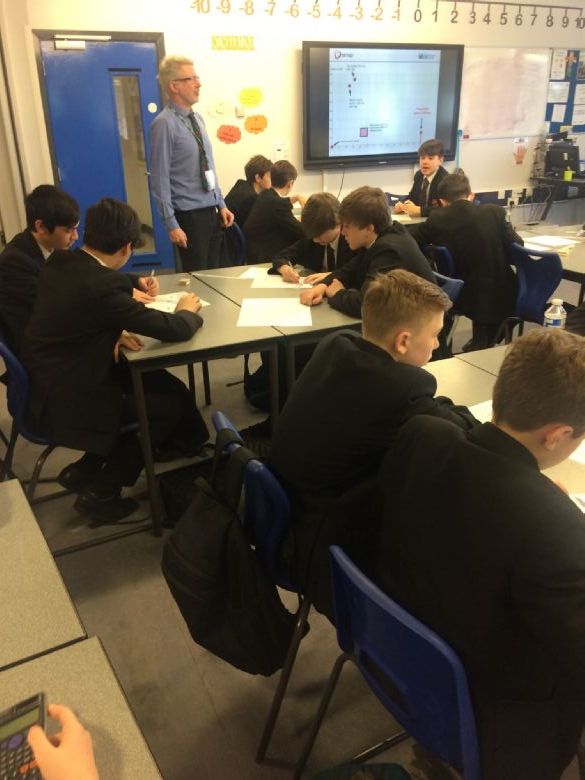 On Thursday 12th March 2020, students from Year 9 took part in a Networks Workshop that looked at using mathematics to solve real life problems.

Martin Bamber from AMSP delivered two network sessions. The sessions looked at networking and specifically robots used by the company Amazon in their warehouses. This fully engaged and motivated students to find the most efficient routes possible for the robots to travel. Matthew (9E1) said about the session: ‘It was really good and applied to stuff in the real world. It was thought provoking and challenging’. Finn (9W2) and Thomas (9E1) were both used as human robots for a demonstration. Finn said ‘It was good fun’ and Thomas said ‘I enjoyed doing it and it helped to understand the concept’.

The students then considered more complex situations which involved blocked routes when getting to a destination. Also the time it would take was also deliberated due to the fact a turn for the robot would also take time. Dylan (9E1) continued this by creating his own blocked routes and found the most efficient routes and quickest times. Rory (9E2) said ‘it felt like it had a big connection to science’ and Sonny (9E1) said ‘the teacher was good and it put maths into perspective’. Many students noticed that the most efficient routes were not always the fastest due to the number of turns the route had.

Martin then finished this off by playing a game of Rogue Robot where pupils would have to pick a direction and by the flip of a coin they would see if they were correct. Callum (9E1) and Christian (9W2) were the winners of each session. 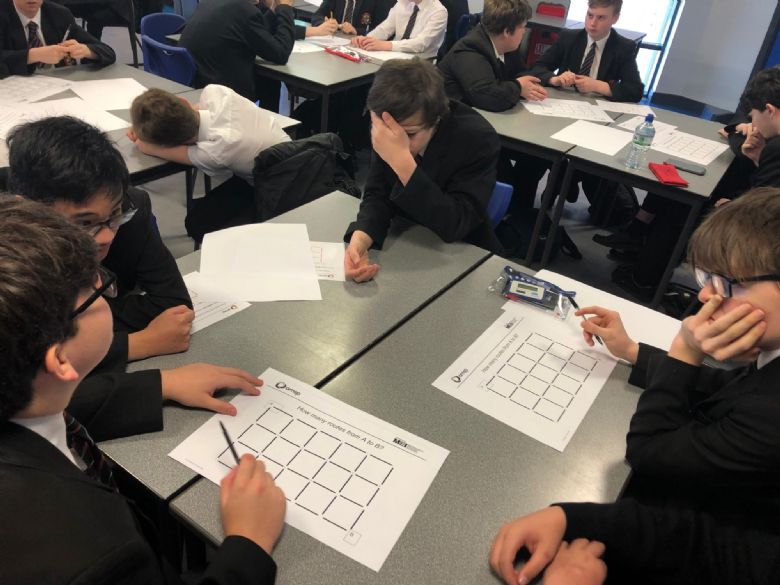 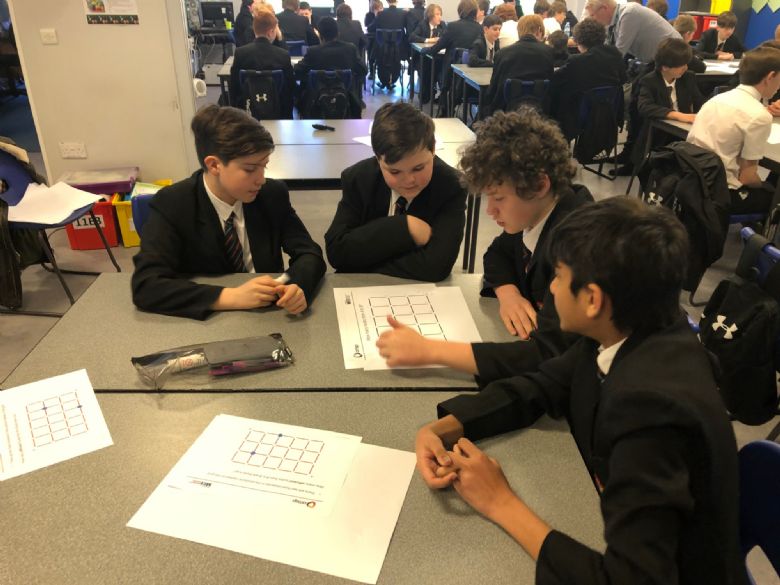 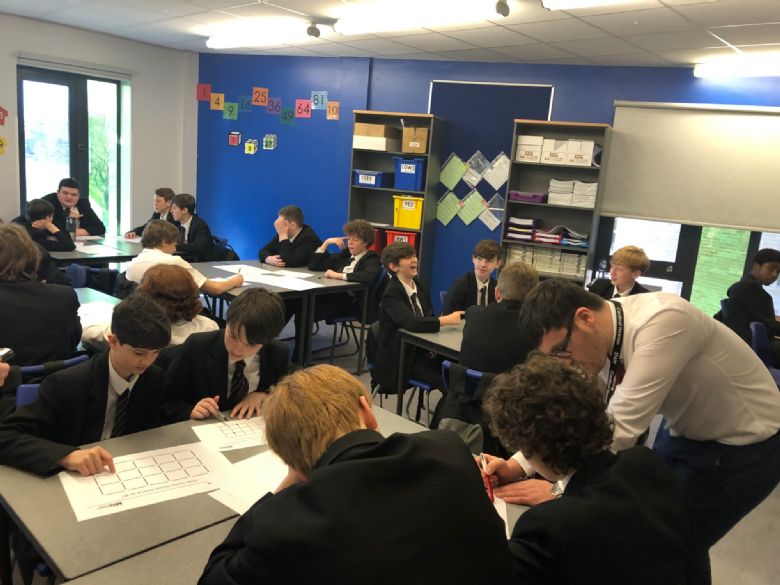 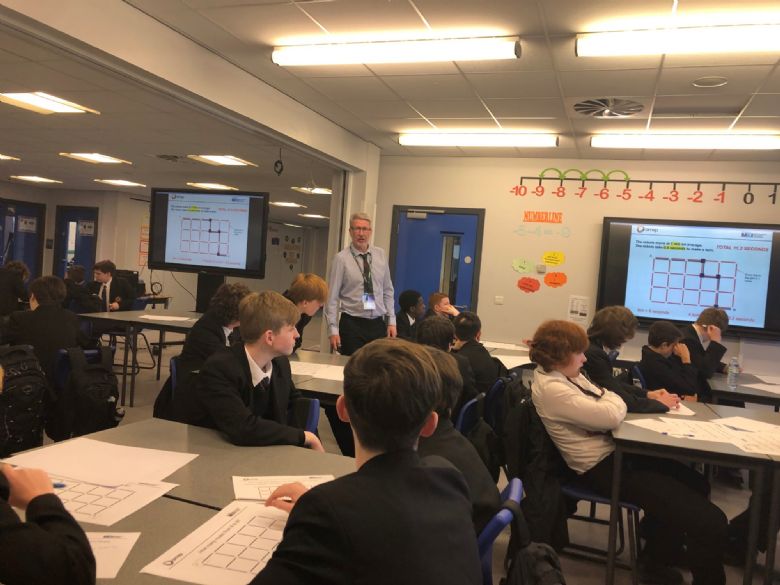 In October 2019, a group of interested Year 12/13 students, including some Broughton Hall students, who study Maths, Biology, Chemistry or Physics, and Mr Waterhouse attended a Q&A session at the University of Liverpool surrounding “The Future of Human Space Flight” The guest speaker was NASA’s current, and first ever female, Chief Flight Director, Holly Ridings. The event was organised as part of the university’s commitment to supporting Liverpool Women in Science and Engineering (LivWiSE) and was hosted by Liverpool’s own Dr Jackie Bell, who is training to become Liverpool’s first female astronaut!

During the talk, Holly discussed her career pathway, NASA’s plans for the next three decades, and the potential for space flight in the future. She answered questions sent in by students from numerous schools, including one from our very own Benjamin W. There was also an interesting discussion regarding the James Webb Space Telescope.

The students who attended really enjoyed the talk and were undoubtedly inspired.

As always, they were a shining example of the best of Cardinal Heenan. 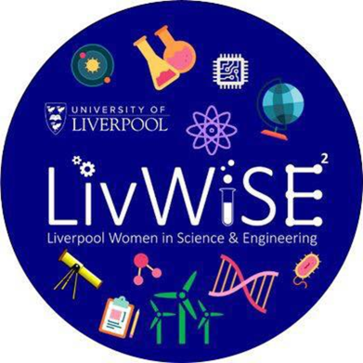 On Monday evenings during January to March 2020, several of Cardinal Heenan’s most gifted Year 12 maths students have been attending additional Problem-Solving classes, held at the University of Liverpool. These events are completely voluntary and aim to challenge and extend how students solve complex mathematical problems. They have also increased interest in mathematics outside the regular curriculum, with some of these problems coming back into school to challenge the teachers!

The sessions have also included support for students looking to apply for some of the top universities in the country, to work on required entry examinations, which take place in the forthcoming autumn term.

The students’ feedback has been continually positive, and they hope to continue attending these events once they get back up and running.

The feedback was so good, that we asked for, and received, extra places! Well done to the students who have attended and representing Cardinal Heenan impeccably.

In February 2020, Cardinal Heenan hosted an event for Year 12 Maths students from a number of schools to attend, aimed at boosting and enriching their experiences of studying A-Level Maths, including some ideas outside of the curriculum. The event was led by Martin Bamber and Barry Grantham, along with Liverpool John Moores University trainee teachers. All Cardinal Heenan and Broughton Hall Year 12 Maths students attended, along with students from Calderstones School, St. Margaret’s School and North Liverpool Academy.

The event included some individual tasks, paired tasks and group work. The students from all schools involved mixed well together and showed their collective mathematical skills to solve a range of problems. The final event was the now famous ‘Dragon Quiz’, which was an hour-long relay competition for each pair of students.

This is the fourth consecutive year we have hosted this event, and it was once again a great success, with student and staff feedback from all schools which attended very complimentary. A special thanks must go to Ann and the rest of the Sixth Form catering team for looking after everyone throughout the day! 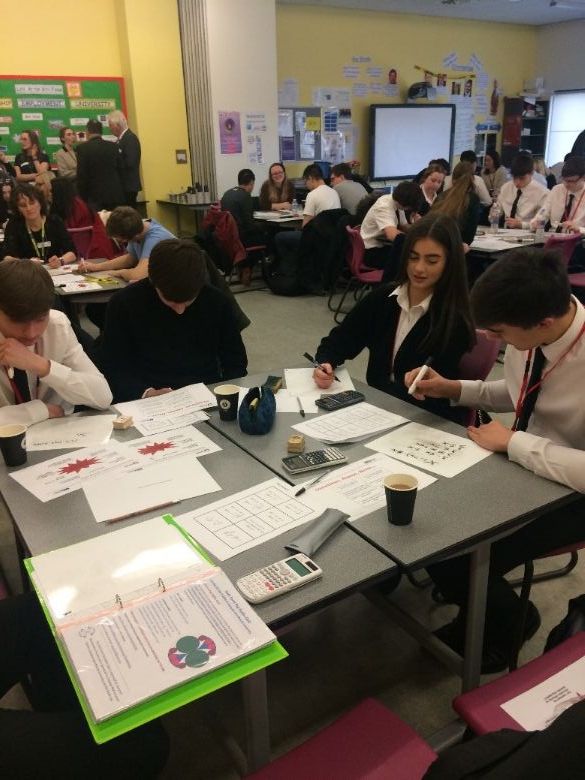 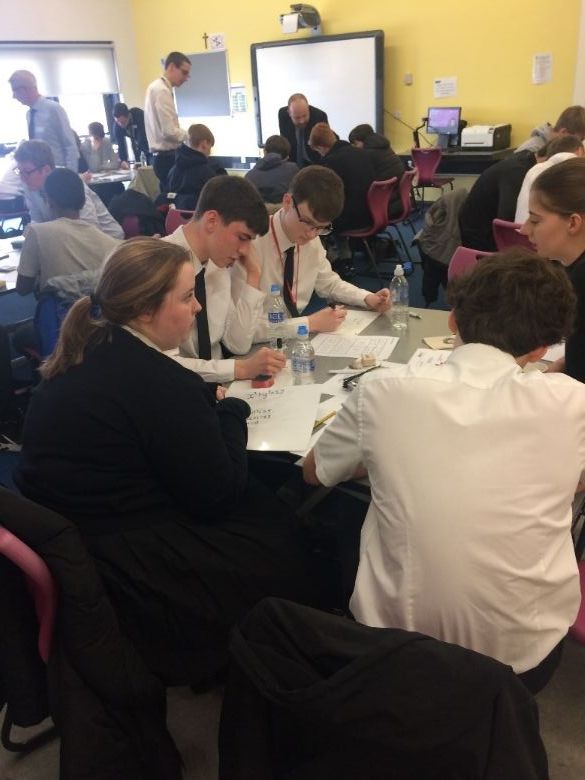 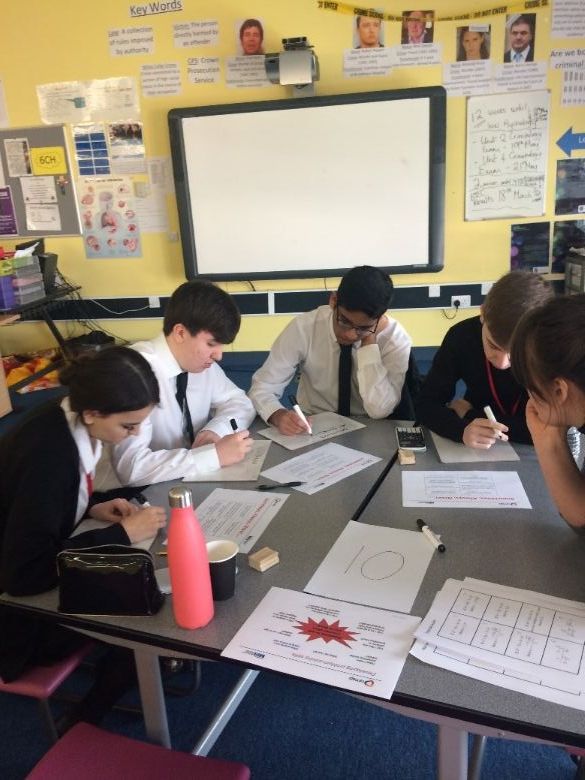 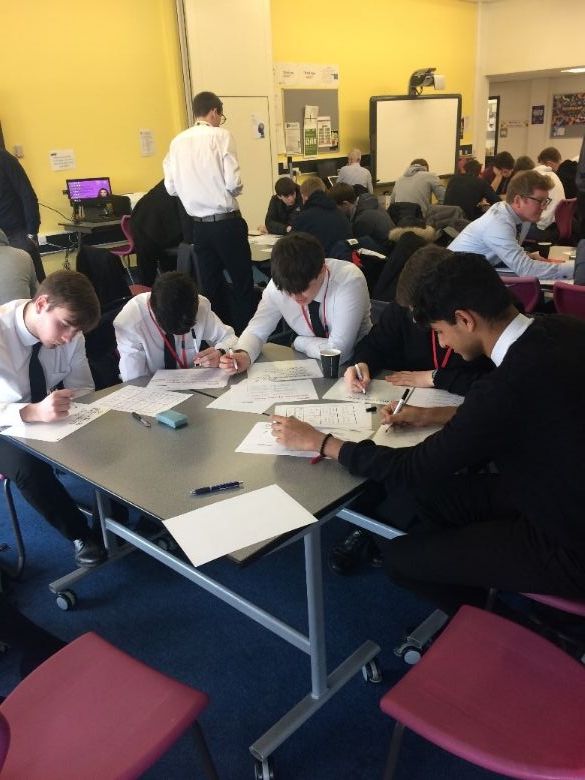 At Cardinal Heenan we are invested in giving your son the best possible mathematics education. To do this, not only are all mathematics teachers specialists, they also have access to CPD courses which are sourced internally and externally to ensure that the teaching and learning of the subject is to a high standard, no matter what your son’s ability is.

This year alone, all teachers in the mathematics department have attended three day training in “Raising attainment in maths – Mastery”.

CPD workshops have also been attended from the North West 3 maths hub in “Mastery and the Ofsted framework”, “Challenging topics for GCSE”, “Probability in the Courtroom”, “Using representations to make sense of mathematics”

Head of department meetings ran by School improvement Liverpool and the archdiocese are also attended.

Seven members of team maths are experienced markers for the Pearson Edexcel exam board, which allows, them to give insightful and thorough feedback to the team and pupils.